I have a very skinny pigeon who's crop isn't emptying, not eating, very little poop of which is only white (urinary part).

Early yesterday I had given the bird some hand feeding formula which just remained in the crop all day, I emptied it late on yesterday and tube fed some baby apple sauce but overnight that hasn't gone through either.

I've just massaged the lower part of the crop, put the bird back in the cage and she did one poop, this one is circled in the photo and does have darker bits in it, the previous two day's is just white as shown.

There's obviously a blockage somewhere, any advice would be appreciated. 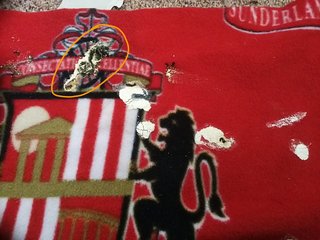 Joined May 5, 2011
·
6,230 Posts
Have you checked way back in the throat for canker? Although it doesn't always show up in the throat or mouth. Keep on feeding applesauce and do the massages. Can be yeast as well. For canker metronidazole and for yeast Nystatin.

Joined Jul 5, 2017
·
106 Posts
Thanks Marina, sorry for the not replying until now. Your help is always very much appreciated.

The apple sauce didn't do anything and I also tried a strong ACV mix together with the massages without success.

I went to the vet's and they gave me some Metoclopramide mixed with some Metronidazole which I've been using twice a day for a couple of day's, at last there's been some dark green poop with the white, obviously it's impossible to know if the Metronidazole has helped if there was any canker but I expect that the Metoclopramide has got thing's moving again.

I've been giving intravenous fluids twice a day and also mixing some critical care formula with water which is tube fed into the crop.

I think I'll continue with the treatment for a couple more day's, I'm not sure if I should replace the CCF formula with the general hand feeding formula as with it being thicker in consistency would it go through the crop and digestive system, I could try though?

I'm also not sure if I should start giving Nystatin on top of what I'm already giving which would clear up any yeast if that has been the problem? I'm hoping it's either been canker or yeast and not and infection that's been resulting in the sour crop.

Joined May 5, 2011
·
6,230 Posts
Sounds as if the vet gave good advice. To be on the safe side, I would include the Nystatin in the treatment. If yeast is involved, it will only get worse with the antibiotics.
A

or, copy this URL onto the address bar in your browser:
https://www.pipa.be/en/articles/ask...denovirus-type-i-or-young-bird-sickness-23719
A

or, copy this URL onto the address bar in your browser:
https://www.pipa.be/en/articles/ask...denovirus-type-i-or-young-bird-sickness-23719
Click to expand...

But there isn't any vomiting or diarrhea which you would expect with the adenovirus.
1 - 8 of 8 Posts
Join the discussion
Continue with Facebook
Continue with Google
or sign up with email
About this Discussion
7 Replies
3 Participants
Last post:
Andrew2007 Jun 11, 2020
Pigeon-Talk
A forum community dedicated to pigeon owners and enthusiasts. Come join the discussion about breeding, shows, racing, performance, health, behavior, housing, adopting, care, classifieds, and more!
Full Forum Listing
Explore Our Forums
General Discussions Sick or Injured Pigeon and Dove Discussions Archive - General Discussion Homing & Racing Pigeons I found a pigeon or dove - now what?
Recommended Communities